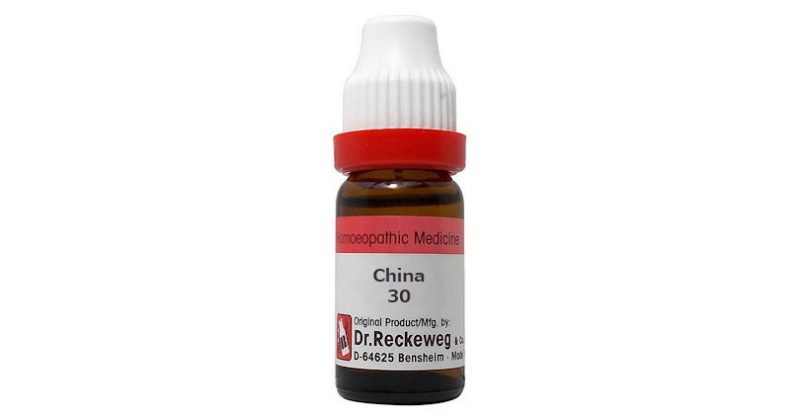 Want to see China benefits in Hindi or Urdu?

Add our website to Google Translate to get the Hindi version.

Introduction and History: China is a center of attraction or interest for homeopathic physicians. It is because it is the first medicine with which Dr. Hahnemann experimented and homeopathic science came into existence. The history and discovery of this medicine are remarkable. Countess ann, wife of the 4th count of Cinchona, was treated who was suffering from tertian fever by the use of this remedy in 1638. Its virtues were known to Europe in 1640. Dr. Hahnemann was studying the plant when he came up with the law of similars. That is why it is of particular interest to homeopaths.

Habit and Habitat: It is a native of South America and is cultivated in India, Jamaica, Java and Sri Lanka. It is a slender tree which is 7 to 10 metres high. It is rough, brown, yellow with black and whitish markings on the bark. The bark is acquired from the branches, trunk and roots.

Periodicity: Periodicity usually occurs in intermittent fever and neuralgia. Paroxysm for two to three hours, every attack comes back every seven or fourteen days, every three months, etc.

Flatulence: Whole abdomen enormously distended, with a wish to belch. Belching provides no relief or gives only temporary relief.

Bleeding: From every outlet of the body. Blood usually is clotted and dark, oppressed breathing with a wish to be fanned.

Oversensitiveness: Body of the patient is very sensitive to touch, lightest touch is intolerable to a diseased part; hard pressure relieves the pain of the same.

Headache: Migraine as if the skull would burst, face flushed, intense throbbing of head and carotids, must stand or walk after hemorrhage or sexual excesses.

Intermittent fever: Paroxysm of intermittent fever, every attack comes back every seven or fourteen days, anticipates it from two to three hours, Sweats only on the covered parts or during sleep.

Pains: Drawing or tearing pains in every joint, all the bones; Soreness all over the body.

Thirst: Thirst of this medicine is remarkably guiding in intermittent fever. Thirst before chill, thirst ceases as early as chill starts. Heat without thirst or thirst may start as chill is over. Great thirst while sweating.

Diarrhea: Chronic diarrhea, without pain, debilitating with emaciation and aggravation at night. Emission of a large quantity of gas, at times, very fetid.

Sleep: Sleep is unrefreshing or constant drowsiness, gets up early in the morning.

Colic: Severe abdominal pain at a certain hour every day, periodical, from gall stones; gets worse at night and after eating, better bending double.

Converse effects: Hunger and yet want of appetite, violent hunger, loathing. though the person is impotent along with sexual excitement; slight pressure or touch is unbearable, hard pressure gives relief.

Feeling: Person feels one hand icy cold and the other hand warm.

Sweat: Perspiration day and night, as soon as one sleeps, during intermittent fever or after the overuse of quinine.

Climacteric: After climacteric there is profuse hemorrhage; acute diseases often follow as dropsy with ringing and buzzing sound (Tinnitus) in the ears.

Irritability: Great irritability and sensitivity of the entire nervous system.

Intermittent fever (malaria): China or Cinchona is a valuable medicine to cure the intermittent fever. It is prescribed in ague fever or malaria, that may be of the quotidian or tertian type, or the paroxysm may come back every week or fourteenth day. Periodicity is clearly defined in the fevers. The various stages of fever are clearly defined, that is, chill, heat and sweating.

(i) Heat: This stage is long standing, generally without thirst. The patient wants to uncover with a fiery red face during delirium. Even if there is a great thirst, the person desires for water only to wet the mouth. During the fever the veins appear enlarged along with the congestion of the head.

(ii) Chill: Chill comes usually in the forenoon. Chill of the whole body and of short-term span. Thirst occurs before and after but not during chill stage. Chill comes back every week. The person wants to remain near the fire. Chill with palpitation, hunger, anxiety, and at times headache; dry teasing cough during chill. The medicine may be said to be one of the thirstless medicines in fever.

(iii) Sweat: This stage comes instantly after the fever stage. There is profuse sweat that makes the person weak; great thirst during sweat. Sweat does not provide any relief to the patient. There is marked restlessness, great hunger or loss of appetite, bodyache, splenomegaly and hepatomegaly with soreness, oedema, congestion and anemia, periodical return of symptoms. Apyrexia is marked with debility, scanty urine and brick dust sediment.

Distension of abdomen: ‘Uncomfortable distension of abdomen, with a wish to burp, or sensation as though the abdomen were packed full, not relieved by belching.’ These patients feel so full and oppressive that they can scarcely breathe and still will feel appetite at meal time. There is fermentation. It seems as if all the food has become the gas in the abdomen.

Bitter taste. Milk disagrees. There is loud rumbling and rolling in intestines. Flatulent colic, especially after eating and at night. Discharge of large quantities of gas. At times, there are griping pains. Offensive gas.

Hemorrhages: Profuse with faintness, loss of sight and Tinnitus or ringing in the ears. Hemorrhage is from any orifice of the body. Blood has a tendency to be dark and clotted. Flow is so profuse as to have almost caused a bloodless condition. Coldness of the face and of the whole body is also present. Features show the presence of collapse, gasping for breath; desires to be fanned – because he believes that he gets more oxygen by fanning. Fanning is not for cooling purposes.

Amelioration: Deep pressure, lying down, by bending double, while fasting, double, from warmth and open air.

Aggravation: At night, wet weather, after eating, from slightest touch, draught of air, loss of vital fluids, every other day.

Flatulence in abdomen not relieved by belching:  Lyc, Chin.

Sweats day and night, as early as one sleeps or even when closing the eyes:Con, Chin.

Repetition: Repetition bears well when symptoms call for the medicine, otherwise, a single dose is sufficient.

Note: China is a deep acting medicine and must be used only after consulting a competent doctor and self-medication should be avoided.