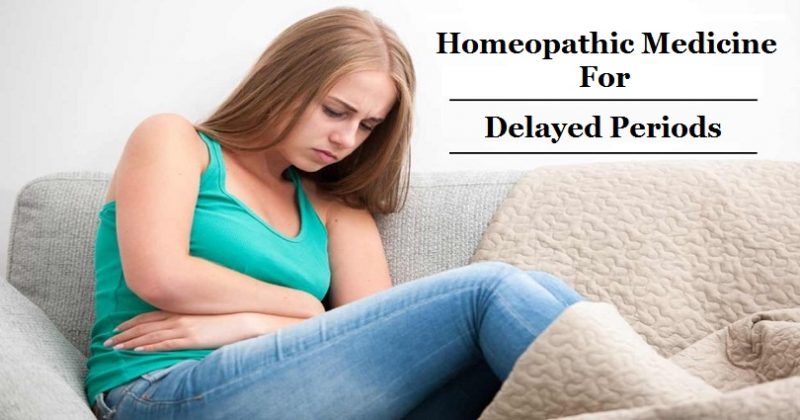 What are Delayed Periods?

Having a delayed period can be distressing for females. The menstrual cycle/period cycle of a female ranges from 21 to 35 days, it may differ from person to person. Menses are considered to be delayed or late when they do not start even after 5 or more days from the date they are expected. In some cases, the menses in a female may even get late by weeks or months. If the menstruation is irregular or delayed in the initial months when they first start (menarche), it is a normal condition. Furthermore, it is also normal in women who are in the menopausal age/stage. In some cases, delayed menses may be a sign of pregnancy.

What are the Causes of Delayed Periods?

Homeopathic mode of treatment focuses on removing the cause which is causing suppression of menses. In homeopathy, homeopathic medicines effectively treat the problem of delayed periods. These remedies get rid of the root cause behind the condition to provide ideal results. The best homeopathic remedies for delayed periods are Pulsatilla, Natrum Mur, Sepia, Conium and Senecio Aureus.

Homeopathic medicine Pulsatilla is made from a plant named Pulsatilla Nigricans known by the name of pasque flower or windflower. Ranunculaceae is the natural order of this plant. This homeopathic medicine ranks at first in the list of remedies to cure delayed periods. The patient may experience uterine pains due to suppressed periods. The periods may be scanty or profuse in nature. Blood of menstruation may be thick/thin and be dark or red in color. Chilliness with above symptoms may be present. Pulsatilla is an ideal medicine to treat late menses during puberty and in case of Polycystic Ovarian Syndrome (PCOS).

Homeopathic medicine Natrum Mur works well for delayed periods in young girls. Heaviness in the abdomen may be present from delayed menses. When the menses arise the flow may be profuse or scanty in nature. They are thin, pale and watery. General debility and anemia are observed. During periods headache, sadness and palpitations may also occur.

Sepia is another homeopathic medicine for delayed menses due to hormonal imbalance. It corrects the hormonal imbalance and cures the menstrual irregularities effectively. Females requiring this medicine have delayed menses. The flow may also be dark colored and scanty. The periods are preceded by backache and violent pain in the abdomen. Bearing down sensation in the pelvis is another important symptom to prescribe this medicine. Heaviness, pressure or pain in the ovaries may also be observed. Profuse yellow-green vaginal discharge may be present with the above symptoms. In addition, sadness and irritability are also present before menses.

Homeopathic medicine Lachesis is a helpful remedy to cure late and scanty periods. In cases of this medicine, periods appear dark, late, lumpy, acrid, dirty looking and offensive. Menstrual colic is also present with scanty flow. Lesser the flow is the more pain is. The pain is most felt in the left ovary. In some cases, headache and vertigo from suppressed menses may also occur.

Conium works well in those cases where periods are late, scanty and last for a short duration. Menses flow is clotted. Restlessness, anxiety, weeping and pain in the breast may appear before menstruation. In some cases, skin rash precedes menses. During menses pain in the hypogastric region, legs and sharp backache may be observed. Inflammation, enlargement and pain in the ovaries may be present where Conium is prescribed.

Senecio is made from a plant known as Golden Ragwort or Squaw weed of the natural order Compositae. It is another valuable remedy to cure delayed periods. Females requiring Senecio have a sensation as if menses are about to come but they do not. Other symptoms that indicate this medicine are loss of appetite and sleeplessness. Pain in shoulders and back may also present. It is highly recommended for suppressed menses in young girls.

Graphites is useful to cure late menses when attended with violent colic. Shooting, gripping, and stitching pain in the abdomen is present with pain in back and hips. In addition, burning or stitching pain in the vagina may be observed. Nausea and headache may also occur. Hands and feet are also cold of the patient. When periods appear the blood flow is dark, pale or black in color. In some cases, leucorrhea occurs instead of a regular period. In such cases, vaginal discharge appears in gushes during the day or at night.

Kali Carb is an ideal remedy to cure cases when menses are delayed by several months. Back pain attends suppressed menses. When the menses arise they are scanty, pale and accompanied by soreness in the genitals. The menstrual flow may have a strong smell. Cramping pain in the abdomen, chilliness, headache, vomiting and nausea may appear with periods. Itching of vulva and violent colicky pains may arrive before menses.

Silicea is another homeopathic medicine for delayed and profuse periods. Suppressed menses are accompanied by pain in the abdomen. Acrid vaginal discharges, pain in forehead may occur before menses. When periods occur they are strong-smelling, profuse and may be acrid in nature. They also last for longer than usual duration. The patient may also feel icy coldness over the whole body. Silicea is also prescribed when a vaginal discharge of white color appears instead of periods.

Note: Medicines mentioned here are for information purpose only. Kindly do not self-medicate.

Fill the Comment Form below.
You can write about your problem To Dr. Arsalan Rauf and receive a reply on How Homeopathy can help in treating your disease or illness.

I had accomplished D. H. M. S in 2008, I have been into practice (in Rawalpindi & Islamabad) since 11 years. During my practice, I have been treating acute as well as chronic disorders. I had also completed MHS (Masters of Human Sexuality) in 2014 from SAIHS. Dengue fever, Developmental Delay and Paralysis attract my attention, therefore, I love to solve these cases.

Apart from Homeopathy, I am M.A in English Literature from Punjab University. I have been teaching English at Post Graduate National College Rawalpindi for 5 years. So I am holding two noble professions. I have written more than 6000 articles on different subjects. To be more specific I have authored different websites as well.

I had accomplished D. H. M. S in 2008, I have been into practice (in Rawalpindi & Islamabad) since 11 years. During my practice, I have been treating acute as well as chronic disorders. I had also completed MHS (Masters of Human Sexuality) in 2014 from SAIHS. Dengue fever, Developmental Delay and Paralysis attract my attention, therefore, I love to solve these cases.

Apart from Homeopathy, I am M.A in English Literature from Punjab University. I have been teaching English at Post Graduate National College Rawalpindi for 5 years. So I am holding two noble professions. I have written more than 6000 articles on different subjects. To be more specific I have authored different websites as well.