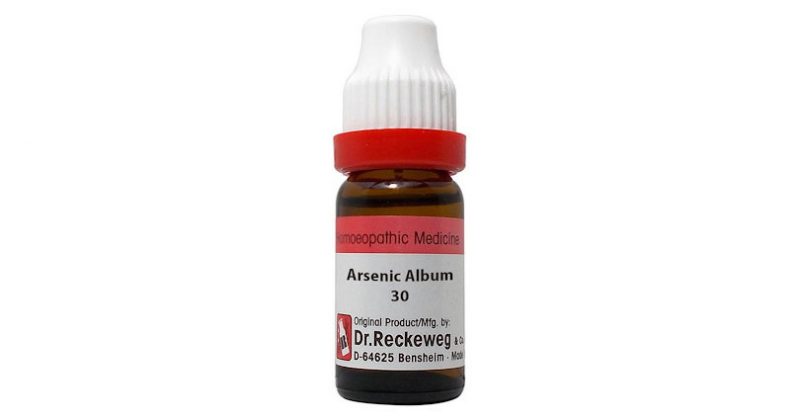 Prover: The prover of the medicine is Dr. Samuel Hahnemann

Duration of Action: Short acting medicine, it may act for more than 30 days in chronic conditions

Temperament: The temperament is very fastidious

Introduction and History: Arsenic is famous as a remedy from ancient times; in olden days it was used as a medicine in India and China. It is also compared with a race of horses due to its restlessness. It is very venomous when taken in fatal doses. Arsenicum Album is one of the most frequently used medicines in both chronic as well as acute diseases.

Description: It is a transparent and white crystalline powder or amorphous lump, have no odour but stable in air. It is gradually soluble in water. The amorphous variety is more soluble if we compare it with crystalline variety. The remedy is soluble in alcohol to some extent and entirely soluble in glycerine. It may be obtained by roasting certain arsenic ores. It is not sold to common people because it is poisonous.

Anxiety: Anxiety with restlessness and fear of death.

Burning: External and internal burning all over the body; burning pain gets relief from heat, hot applications and hot drinks, affected parts burn like fire,

Putridity: Discharges from the body are fetid in nature and the odor of the discharge is cadaveric.

Periodicity: Complaints come back periodically; for example, everyday, every third day, every fourth day, every fortnight, every week etc.

Acridity: All secretions and excretions are acrid and excoriate the parts; even their touch causes burning and redness.

Dryness: Internal and external parts get very dry. Skin gets rough; even the lips are dry and cracked because of dryness.

Irritability: Stomach is very irritable, everything comes out after consuming it in, even water is vomited though the patient drinks only sips of Water at frequent intervals.

Fear: Great fear of death, thinks that he is experiencing an incurable disease and there is no use of taking medicine; so refuses to take any medicine.

Emaciation: There is fast and sudden emaciation of the body parts.

Faintness: Nausea and faintness from the odour of fish, meat and eggs because these foods are allergic to him.

Restlessness: Patient is very restless, too weak to walk physically. It is one of the Nash’s Trio of Restlessness.

Asthma: Asthma gets worse at midnight. Suffocative catarrh, burning in the chest. Expectoration is scanty and frothy. Cough gets worse after midnight and becomes worse lying on back. Burning pain all over; haemoptysis; dry cough; unable to lie down; complaints with restlessness and prostration; afraid of suffocation.

Fever: High tempearture. Periodicity marked with sadness; paralysis incomplete; septic fever; with marked exhaustion. Cold sweat, hay fever, great heat around 3 am, complete restlessness. There is an entire image of death while fever – eyes are sunken; mouth and tongue are black, cracked, sore even the gums and teeth bleed during fever.

Diarrhea: Gastric problems from ice cream, cold food, ice water, sausages and alcoholic drinks. Stools are acrid, scanty, watery and offensive with vomiting and burning in the abdomen; hepatomegaly with vomiting and diarrhea. Dysentery – bloody, dark and very offensive in nature. The skin around the anus gets damaged because of diarrhea. All complaints are accompanied by fear of death.

Cholera: It is very good remedy for cholera. The main reasons are consuming decayed food, ptomaine poisoning, ice cream, sour beer and so on. Cholera stools are like the water of rice in color and contain a very offensive smell, marked restlessness and anxiety with great weakness and prostration; diarrhea gets worse at 12-2 am at night. At times, the color of the stool is blackish; patient is very fastidious with an intense thirst for cold water in small quantities at short intervals. Burning sensation all over the body excluding head; anxiety with fear of death.

At times, the fear drives the patient out of bed; he hides in a closet. He is violent, increase of terror and horror in the dark. Several complaints come in the evening when darkness approaches. The patient of Arsenic is very anxious and restless, too weak to talk. He gets very irritable and sensitive. In Aconitum, the fear of death is also present but the patient also tells the exact time and date of death; he also thinks that his disease is curable by taking medicine.

Burning: It is also one of the best remedies for burning. In Arsencium Album, burning is very particular-burning pains, the affected parts burn like fire, as if hot coals were applied to the parts, get better by hot drinks, heat, and hot applications. Burning pain in the nostrils, eyes, throat, mouth, bowels, stomach, hemorrhoids, urethra, ovaries, bladder, genitals especially in chest, breasts, about the heart, back, spine, ulcers of skin, veins, cancer and carbuncles etc.

Aggravation: By cold bathing, cold wind, cold food and drinks, after midnight and midday 12-2 pm/am lying on affected side, by walking fast.

Years for very hot drinks, unless boiling, stomach will not retain them: Casc, Ars, Chel.

Burning in every organ or tissue of the body: Sulph, Ars, Phos.

Burning as if sparks of fire falling on the patient: Sec, Ars.

Higher potencies are prescribed in nervous and mental ailments.

Highest potencies work efficiently when the general and keynote characteristic symptoms are present.

It should not be prescribed to those patients who have very low vitality even if the characteristic symptoms of the remedy are present as it may cause rapid death without pain.

Repetition: The medicine may be repeated frequently in rapidly developing diseases; like in cholera, low potencies of Arsenicum Album may be repeated every 10 minutes until the condition improves.

Note: Arsenicum Album is a deep acting medicine and must be used only after consulting a competent doctor and self-medication should be avoided.